It has been said that to be an ethnographer is to ‘question the imponderabilia of everyday life’. I tried to practice this during my stay by becoming conscious of things which I would have otherwise ignored. For instance, a barangay (village) which we drove past had a great collection of plastic bottles. I assumed these would be recycled, perhaps in return for some money. However, when I questioned it, I found out that the bottles are put in a chipper and the small pieces are added to concrete to build stronger, longer lasting homes as part of a government scheme which uses plastic waste to build houses!

I also saw a man welding in his garden. Upon further inspection, he appeared to be building an extension to his motorbike to make a tricycle. My first experience of these was in Manilla, we sat in a small low side-cart and held our breath, terrified as the cars and buses drove past so much faster and larger than us. Tricycles are the most common form of transportation in the province of Northern Samar and no two are the same. Each is personalised by the driver. I rode one with curtains, another with flames and skulls compared to third which had ‘in Jesus name bless our trip’ painted on the front. One tricycle managed to transport eight of us in one trip! Two sat behind the driver on the motorbike, four were on seats within the extension and another stood on the back holding on. On top of this, our rucksacks were tied onto the sides or the roof. We were so heavy that the driver had to zig zag up any hills we came across. The versatility of the Filipino people meant that more people could travel in a single journey on a motorbike than a typical car in the city. 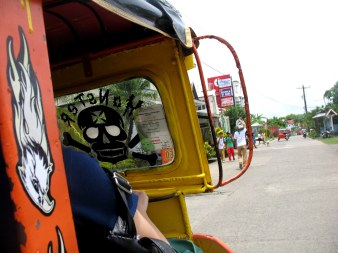 I took a moment in the house where I was staying to observe everything in the room. Like my house in the United Kingdom, there were plaques printed with quotes about family and home; although small, I found comfort in this similarity as there were so few. Ornaments of San Antonio, Jesus and the Virgin Mary were on almost every surface and through a door I could see a large calendar advertising the mayor. All of these things were common to every house that I visited across the Philippines with both religion and politics being central to the lives of the people I met. The local mayor is highly regarded throughout the Philippines, such that, the current president of the Philippines was elected following his popularity as the Mayor of Davao City.

I noticed the picture of the mayor on T-shirts, number plates and is the Head of the staff working in the Rural Health Unit (RHU). It was explained to me that people with TB would often go to the mayor before coming to the RHU and it became obvious that this was controversial. Some thought it rather undeserving that the mayor be considered Head of the hospital, whereas, others were grateful for the money and support he offers. I was told that the succession of mayors runs as a dynasty, despite there being a vote, the previous mayor was the wife of the current and the next will likely be their son. The previous mayor, controversially, created a job towards the end of her term which only she was qualified to hold, allowing her to remain influential in local politics. Feelings towards the mayor and his family were mixed but everyone seemed to have an opinion. On the other hand, I do not know who my local mayor is! Part of that reason is that I feel I am able to trust that whoever is voted in will be fair. This did not seem to be the case here and some nurses told me stories of how the relationship with the staff at the hospital and the mayor can affect how funding is allocated.

I noticed that religion is not only found within the home and church but is influential all around the barangay (village). The RHU looked as though it was decorated for Christmas, despite it being July and by no coincidence, St Michael’s church is found next door. I was told that the families of patients often go to St. Michael’s church to pray whilst visiting and it is not uncommon that their faith in God is thought to have healed their loved ones, rather than medicine. Religion brings these small communities together and the stories of miracles, prayer and hope were inspiring to hear. Traditional rituals and festivals are celebrated together and I was kindly invited to a fiesta in a neighbouring barangay whilst some of my friends attended a pageant show being held at another to raise money for the church. There was a warm, welcoming feeling of being part of a community. 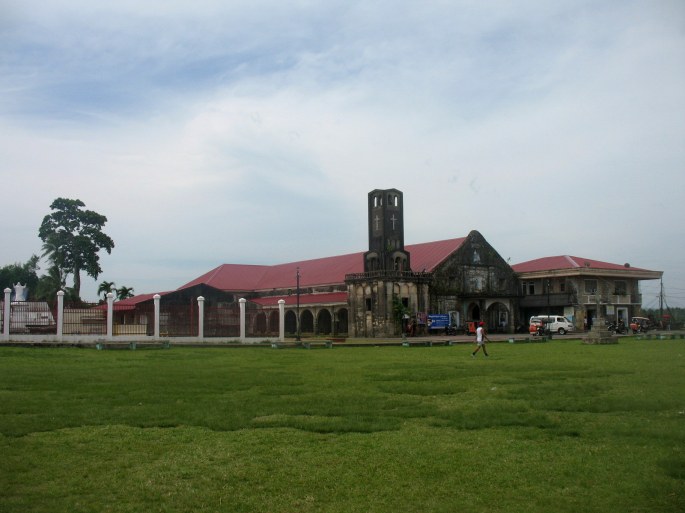 There are two main pastimes within the Philippines: basketball and karaoke. A basketball court is common to every barangay (village) and there is almost always a group of men on or around the court. Furthermore, whilst walking aroundElvis or Madonna can often be heard being sung extremely loudly! Our neighbour hosted a karaoke party during my first weekend– I thought that this might be for a child’s birthday but it is enjoyed more so by adults! I was invited to a karaoke bar for dinner; I was originally shy and hesitant to join in but the enthusiasm of the locals encouraged me to have a go. By the end of the night I was hogging the microphone and did not want to leave. Everyone I met was so open, social and confident. It did not matter if you could sing or were good at basketball, as long as you were having fun.

Basketball courts are social areas and are found in every barangay

The places I visited were so lively, yet relaxed and there appeared to always be something to do despite there being so few facilities which I attributed to the collectiveness within the barangay, which is unlike any I have witnessed. I think that life in Northern Samar is best summed up by Jane Austen: ‘where people are really attached, poverty itself is wealth’ (in Northanger Abbey). I believe that I have witnessed this during my visit and have made friends with some of the most hospitable and kindest people.