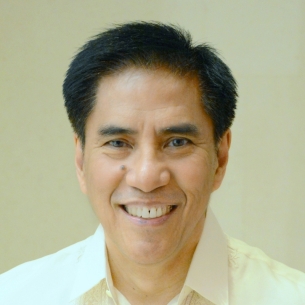 I was born and raised in Manila in the halcyon days of the 1950s, the eldest of 8 children. I was in high school in the 1960s when the Beatles and the Vietnam War were grabbing headlines. I graduated from medical school in 1976, four years after martial law had been imposed in the Philippines. I started my career in the rural villages of Southern Mindanao in 1977 as a community physician and primary health care organizer.

The passion and driving mission of my professional life has been to improve health care in the country, particularly for poor people in rural, remote, and underserved communities. While I was raised in the city, I have had a life-long romance with the rural countryside and have lived and worked in various parts of the country for short and long intervals. My Catholic upbringing, Jesuit education, and parents Conrado and Milagros who were both health professionals influenced me in so many subliminal ways that my basic instinct has always been “to serve”.  I found that path of service in public health which demanded that I keep a broad perspective on health issues, considering the socio-economic, political, and cultural aspects of things.

From organizing health programs in rural communities, I took a scientific turn after I completed an MSc Community Health in Developing Countries at the London School of Hygiene and Tropical Medicine and a short course on epidemic control at the US Centers for Disease Control and Prevention in Atlanta, USA. Afterwards, I rose in the Department of Health bureaucracy to become Assistant Secretary. Then I left government to join the private sector first in a private health insurance company and later in a pharmaceutical company.  But when President Gloria Macapagal-Arroyo ascended to the Philippine Presidency in 2001 in a political turnover that saw her predecessor impeached, she appointed me Secretary of Health (Minister) of the Department of Health where I served from 2001 to 2005.  The fight against SARS in 2003 was probably the most intense period in my stay in office and my training as an epidemiologist and health educator got me through the crisis. From 2005 to 2012, I served at the Department of Human Resources for Health at the World Health Organization in Geneva where I led technical and policy work on global health workforce issues, including for health professional education, retention, and migration. The WHO Code on the International Recruitment of Health Personnel was developed under my watch, negotiated and adopted by Member States at the World Health Assembly (WHA) in May 2010. The Code was only the second one approved by the WHA after the International Code of Marketing of Breast Milk Substitutes in 1981.

My wife Dr. Elvira Sto. Nino Dayrit shares my passion for public health. When she was Director of the Maternal and Child Health Service of the Department of Health from 1986 to 1992, the DOH increased national immunization coverage from 25% to 90%.  Our 2 daughters, Sophia who is an environmental scientist and Roxanne who is an aspiring veterinarian, are carving their own unique careers.

I am a baby boomer Dean of Ateneo School of Medicine and Public Health (ASMPH) in the midst of the millennial generation. I see our medical students as the hope for tomorrow and the reformers of our health system. I try to share with them my passion and mission for improving health for all Filipinos. Doing field research in Northern Samar has brought me full circle with my first love of community health.