On the day we went to the island, I was feeling unwell. Although I had loved every minute of each day in the province of Northern Samar so far, my body clock had not – it hadn’t adjusted to the time difference and I had not slept properly since arriving in the Philippines! I was excited at the prospect of seeing more of the province, but wondered if my body clock would ever let me get some much needed rest. We got onto the tricycle that was humming outside and it zipped to the port. Men at the port helped us load our bags onto a small wooden boat. The engine roared as we ventured across the sea, bobbing and swaying in the boat, to our destination. 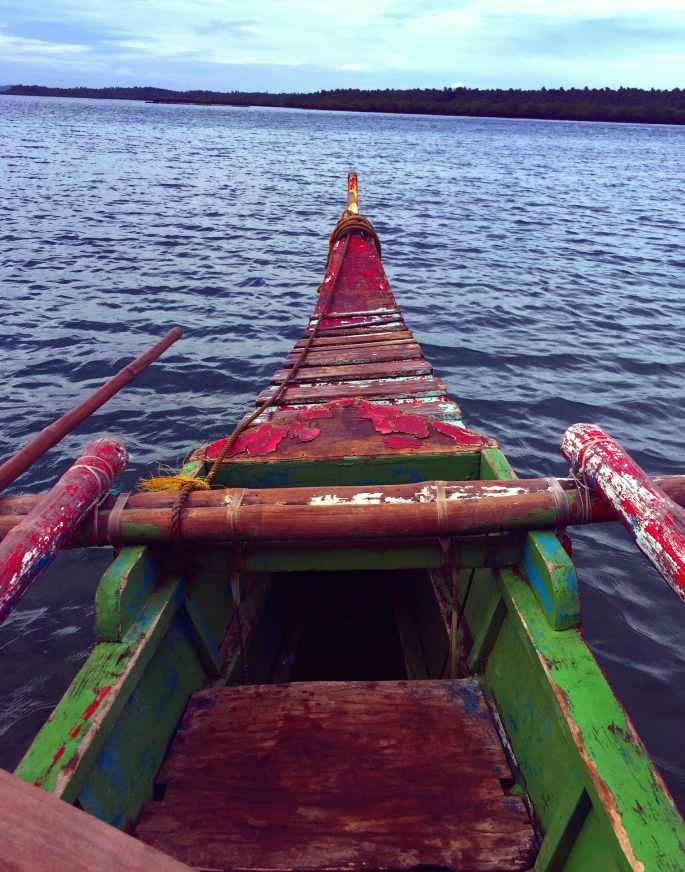 As I looked over the side of the boat, the water beneath was so clear. I could see pebbles resting on the ocean floor. Across the water, there were houses and small, colourful boats resting on the sandy island. Bright green trees reached up high into the sky. A beautiful sunset welcomed us. We wandered around on our first night. A barangay health worker came out of her house with an endless supply of chairs and gestured for us to sit. We chatted with her and her family underneath the stars. The air was lovely and a gentle breeze rolled in from the sea. The place had a calmness and steadiness that was indescribable. Jowel told me that the sea breeze had healing effects. We all wandered back to our home and enjoyed some hot food, cooked for us by the kind lady and her mother who had opened their home to us. I lay down in bed, closed my eyes and woke up 8 hours later. That was the first night that I slept all night.

The next day I felt invigorated, and sprung into action – perhaps the sea breeze was indeed magical after all. We talked for hours with barangay health workers and asked them endless questions about the area, the people, their health and their lives. They happily shared so much of their knowledge with us and told us about their own experiences. One lady said that her husband had been possessed by spirits that resided in the trees here, while another told us that the same has happened to her child when began speaking in tongues. I was enchanted by their stories, and the more they told us about the island, the more the place came alive with magic.

The barangay health workers took us on a tour of the island, teaching us about every medicinal plant that we passed. We all gathered round under umbrellas to shade us from the sun as we gazed at a plant, while a lady told us recipes to make an elixir that would treat coughs and colds, the sting of a scorpion, lower blood pressure, relieve stress and endless other remedies and concoctions. How fascinating it was to learn about, the medicinal properties of the plants that grew here from the local people themselves. Children started walking with us as through the streets of the island. The paths were lined on either side by lush green grass and colourful wild plants. Clothes were draped on wooden fences that bordered the path like bunting. As I walked along, familiar songs echoed from houses: the Beatles, Celine Dion, Frank Sinatra and the people inside were singing.

Walking with the local children

Everywhere the eye could look there was life: people were playing basketball, children were hurtling and whirling themselves over a piece of string pulled tight to form a high jump, cheering each other and laughing as each one took their turn to jump. Every pocket of the island was filled with hustle and bustle that bursted at the seams. 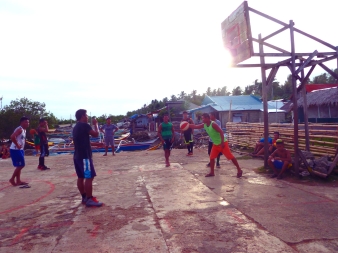 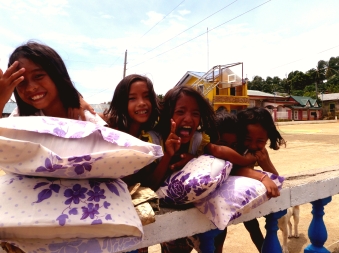 Later that day, I met a hilot – someone believed to be blessed with healing powers. One of her eyes was brown and kind and the other glistened a magical silvery blue. She told me that she could feel the stomach of a pregnant woman and know details about the baby growing within. She learnt it from her mother, she told me. The hilot looked at my face carefully and thoughtfully, smiling. She told me that my face looked just like her niece’s who she hadn’t seen in a very long time and she felt very happy that I had came to see her. I remember feeling a sense of something slightly magical about that meeting with the hilot. Something I could not explain but I could feel deep inside.

On my walk home, two ladies called me over to a hut. We chatted for a while and they shared stories of their lives with me. Some stories were of heartbreak and loss, others were of happiness and friendship. One told me that today was her 82nd birthday. I sang happy birthday to her in English as a beautiful sunset fell upon the sea. There was something very calming about this place. The bugs, the wildlife, the streets, it was all so simple, yet so beautiful. The island seemed to sooth the soul; it felt magical.

The next day, we got on the small wooden boat and left the island. I felt that there was something very special about Cahayagan. It was one wonderful pot of song, mystery, adventure, chickens, dogs, lizards, medicinal plants, healing elixirs and remedies, people, kindness, stories, magic and tranquillity all at the same time. There was such a sense of spirituality, community, friendship, family, love and goodness there. There was happiness all around. 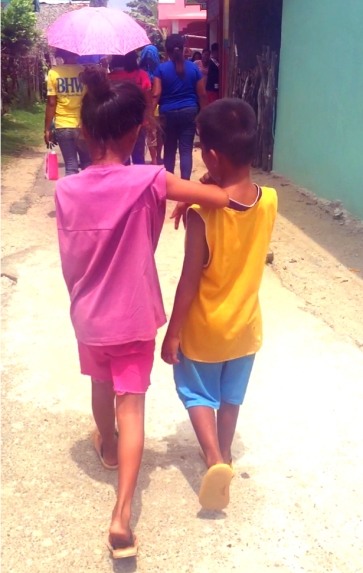 As Hellen Keller said: ‘The best and most beautiful things in the world cannot be seen or even touched, they must be felt with the heart.’ As we bobbed away, I thought of the day we had walked around the streets of the island. Walking along a street beside strangers is something most of us do everyday and take no notice of.