I learned how to make suman latik from the mothers of a barangay (village) in Northern Samar. Against the backdrop of tropical greens and the sound of waves crashing to shore, I watched in awe as my favorite local Christmas treat came together. I was also reminded of the most important things in life.

Happiness does not require much. Neither does latik. Suman latik is a Filipino sweet sticky rice dish with caramel sauce. This gift of a dessert (literally, as it is a wrapped version) only needs five ingredients: (1) glutinous or sticky rice, (2) salt, (3) vanilla essence, (4) muscovado sugar also called panutsa, and (5) coconut milk.

The suman or sticky rice base is prepared by mixing together glutinous rice with a pinch of salt and two drops of vanilla essence. You can skip the vanilla essence altogether but Juana (a pseudonym), the expert latik maker of the group, prefers to include it in her recipe because of the fragrant smell. Juana learned how to cook latik from her grandmother. The vanilla also turns the rice into a lovely shade of yellow. Equal parts of water is added to the rice mixture and has to be brought to a boil. You have to make sure that the rice mixture does not dry up and that some water is left as the rice cooks. 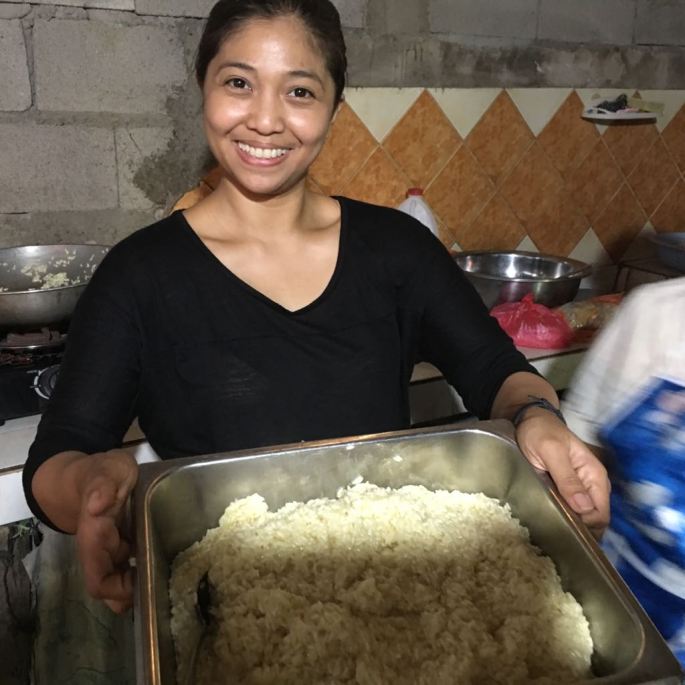 Once the desired sticky consistenvy is met, the rice mixture is taken from the fire to cool. At this point, the rice will not be thoroughly cooked yet and will be hard to the bite. You do not need the rice to be completley cooked. It is perfect for packing just as it is – hard bits and all.

Wrapping the rice with kikil-kikil leaves requires some skill. The mothers were so indulgent in teaching us how to place the rice into the leaves over and over again. It took us a few tried before we got the hang of folding the rice mixture into triangular parcels.

The leaves vary in sizes. One has to be mindful about the amount of rice placed into each leaf to ensure that the rice package remains intact. Unlike origami, there are no strict rules for folding the leaves of the suman. The wrapping techniqe is unique because it does not have to be held together by string or any natural fiber to keep its shape. Creases on the leaves make for great traction and keep the mixture inside the leaves for further cooking.

The wrapped rice are then placed into a big pot. Water is poured over pyramids of green and the the pot is covered and brough to a boil over low fire.

4) Slow and steady (is not always easy but) is necessary

Suman latik has two components: the sticky rice base and the caramel sauce called latik. We moved on to making the sauce whilst waiting for the suman to cook.

We squeezed milk from the grated coconut and place it over low heat. Before the cocount cream reached boiling point, we added bars of muscovado sugar also referred to as panutsa in the local dialect. Muscovado is a natural sugar with strong molasses content and flavour.

Like the sticky rice, the dipping sauce required constant and consistant stirring. It was quite an arm workout! The sauce had to always be in motion lest the rice or the sugar burn at the bottom of the pot.

The mothers would laugh every time I would ask whether we were done cooking. In every stage of the cooking process the following questions escaped my lips: Tapos na po ba? (Is it finished?),  Pwede na tikman” (Can I taste it already?), Luto na ba? (Is it cooked yet?)  and  Kailan mo malalaman na luto na? (How do you know when it is cooked?) .  To all my questions they answered Maghinay-hinay ba (Take it easy). This impatient city girl was reminded that good things take time.

The suman was not yet done cooking after we had prepared the caramel sauce. We weren’t even allowed to lift the pot cover to check the progress of the suman. Lifting the cover would delay the cooking process said one of them. They say there is a certain smell that signals them when it is ready. I could not even differentiate the smell of rice from that of smoke so I left it to the mothers to tell us when we can finally lift the pot from the fire.

I chatted with the mothers, heard their stories and their songs while waiting for the rice to cook.  Some children even came by and performed a duck song and dance number for us.  I had so much fun being with them that I dreaded the announcement that the rice was ready for it signalled that it was time almost to go.

We took turns in peering into the pot until one of the mothers took out one packet of rice. We opened it and poured latik over the rice. A fork was passed around and we all had a taste of the day’s materpiece. The fragrant smell, the compact shape, the lightest hint of yellow, and just the right thickness for our latik –we made good suman!

The mothers had been so gracious sharing their time, talents, and age-old cooking tradition.